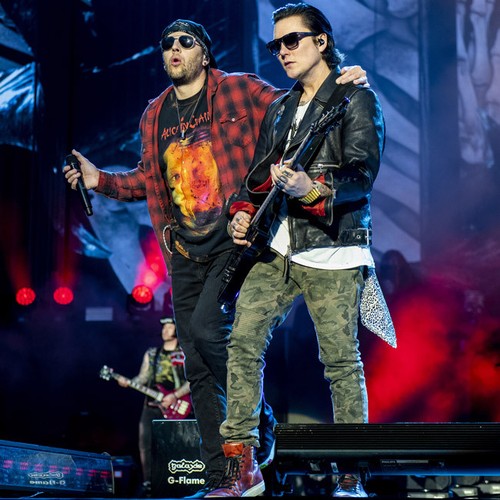 Frontman M. Shadows has revealed the heavy metal band’s eagerly-awaited follow-up to 2016’s ‘The Stage’ takes inspiration from the 44-year-old hip-hop superstar, as well as soul and jazz music.

In an interview with Metal Hammer magazine, Shadows said: “The thing about Kanye is that he is pulling from such great soul music.

“I didn’t grow up with that stuff – my dad listened to Boston and Alice Cooper, I didn’t get that taste of black music and old soul. So, diving deep into jazz musicians … we’re not trying to do a jazz record, but the chord changes and progressions are so eye-opening to us.”

The ‘Seize the Day’ rocker explained that the group have been sitting on the record for the past 12 months as they have been waiting to add strings, but the COVID-19 pandemic put a spanner in the works.

He added: “The record’s been recorded for a year, but we haven’t been able to put the real strings on it, because we couldn’t fly out to Prague. When an orchestra have to social distance and they aren’t sitting next to each other, they can get out of tune, and we have just finally got to a place where we can use this 70-piece orchestra as we intended.”

The 40-year-old star – whose real name is Matthew Charles Sanders – previously teased that the LP will see them head in “a completely new direction, and it sounds nothing like anything we’ve done. That’s all I’ll say about it: it’s over the top, and it’s very eclectic and wild!”

The ‘Hail to the King’ band previously hinted at addressing the issues that affect the world on their eighth outing.

Guitarist Zacky Vengeance, 40, said previously: “I think it’s important for us to lend our voice to what’s shaping the world socially and politically.”