Fulham have been relegated from the Premier League after a disappointing 2-0 home defeat to Burnley at Craven Cottage saw their one-year stay in the top flight come to an end.

Ashley Westwood and Chris Wood delivered the body blow to the Cottagers hopes in the first half and their top-flight status will end in a few weeks time.

After a lively start by both sides, it was the hosts who forced the first save of the night. On six minutes Andre-Frank Zambo Anguissa tried his luck from 20 yards but Nick Pope always had it covered.

And six minutes later the Cottagers were at it again. But Ademola Lookman could only head over the bar from six yards out after excellent work from Ivan Cavaleiro.

Aleksandar Mitrovic’s needless foul the put the Cottagers under pressure but Ben Mee’s header was no trouble for Alphonse Areola.

Burney had the ball in the net on 20 minutes but Chris Wood’s effort was ruled out. The ball was deemed to have gone out of play in the build-up and it was let-off for the hosts.

Clarets keeper Nick Pope then saved comfortably from Cavaleiro as the half-hour approached. Dwight McNeil and Charlie Taylor then combined well to feed Wood whose diving header was deflected behind.

But the goal always seemed to be coming and Westwood opened the scoring on 35 minutes. Matej Vydra did well to control a long ball forward before feeding Westwood, who bundled the ball home from 12 yards.

Things went from bad to worse as Wood doubled the visitors’ advantage one minute before the break. The Kiwi played an excellent a one-two with Josh Brownhill before smashing home from 20 yards.

It left the hosts with the proverbial mountain to climb in the second period.

Burnley comfortable after the break

Fulham knew they needed three goals in the second 45 minutes and tried frantically early on without much quality. But a header from Mitrovic from Cavaleiro’s corner at least forced Nick Pope into a save on 57 minutes.

And just 60 seconds later the Cottagers came close to pulling one back. Bobby Decordova-Reid picked out Mitrovic’s run but his header flew into the side netting.

Fulham then had a couple of penalty appeals waved away in the space of 60 seconds. Alphonse Areola then raced off his line to look to close down Vydra, and it appeared as though he may have handled outside the area. 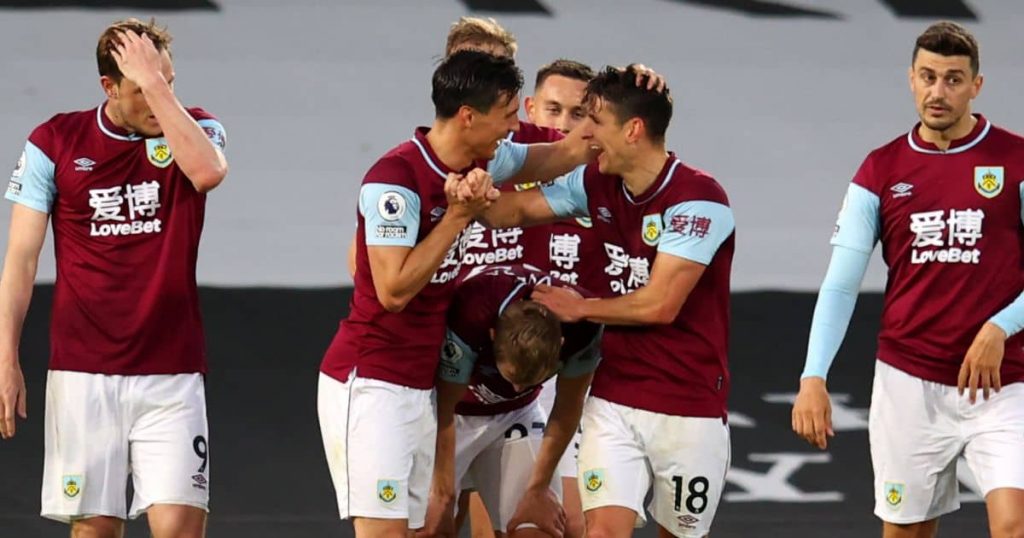 But nothing was given and few minutes later Fulham hit the bar. Onomah’s shot beat Pope, but not the woodwork.

Chances continued to fall at both ends and Jay Rodriguez’s superb pass to Dwight McNeil should have resulted in the Clarets third. However, Areola was equal to the task.

Fulham threw men forward in search of an impossible three goals late on but it was not to be and they will be in the Championship next term.