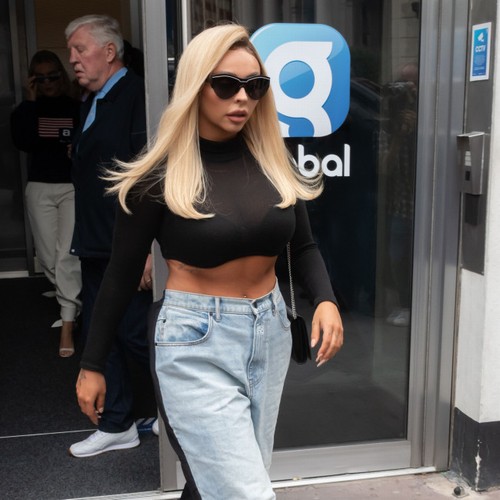 Jesy Nelson has seemingly confirmed the title of her debut solo single.

The former Little Mix star took to Instagram to share a polaroid picture of her rocking a Union Jack bikini stood next to some weight-lifting hunks with “Boyz ’21” scribbled on it in marker pen.

It appears the new single is called ‘Boyz’.

A clip of the 30-year-old singer filming a music video in Edgware, North London, with a dance troupe also leaked online, with Nicki Minaj’s vocals heard as they performed to the track, further fuelling speculation that the 38-year-old rap megastar is featured on the song.

Meanwhile, it looks like Jesy could have a chart battle with her former band on her hands.

With her new single imminent, the ‘Sweet Melody’ hitmakers – comprising Perrie Edwards, Jade Thirlwall and Leigh-Anne Pinnock – are expected to announce their next chapter on their 10th anniversary on Thursday (19.08.21).

A music insider spilled earlier this week: “Little Mix have had big plans for their 10th anniversary for a long time.

“They started those discussions while Jesy was still in the group. Plans did change after they delayed their tour and Perrie and Leigh-Anne got pregnant. But a celebration of their music feels like the perfect way to mark the occasion.

“It is unfortunate and quite awkward for them all that it will be coming out around the same time as Jesy’s music. But there is nothing they can do, really. They won’t change their plans just to avoid her. They are going to make the most of their incredible decade of achievements.”

Jesy announced that she was quitting Little Mix after nine years in 2020 after saying that being part of the group had “really taken a toll” on her mental health.

She wrote: “The truth is recently being in the band has really taken a toll on my mental health. I find the constant pressure of being in a girl group and living up to expectations very hard.

“There comes a time in life when we need to reinvest in taking core of ourselves rather than focussing on making other people happy, and I feel like now is the time to begin that process.

“So after much consideration and with a heavy heart, I’m announcing I’m leaving Little Mix. I need to spend some time with the people I love, doing things that make me happy. I’m ready to embark on a new chapter in my life – I’m not sure what its going to look like right now, but I hope you’ll still be there to support me.”