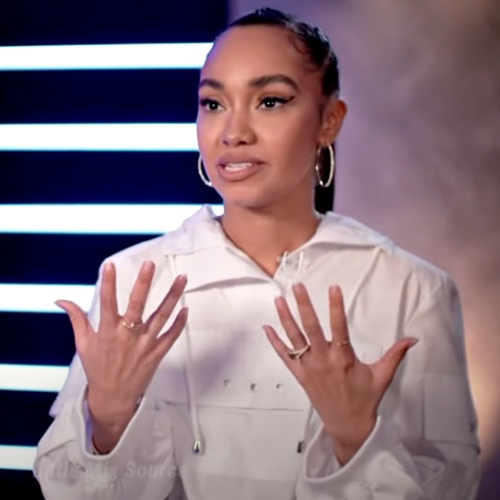 Little Mix joined Nick Grimshaw on BBC Radio 1 today to chat about what it was like shooting the video for Confetti, and what they’d like to do if they were actually men for the day. Leigh-Anne also spoke about her pregnancy after revealing the news on her Instagram yesterday.

Leigh-Anne speaking about her pregnancy:
“I can’t believe it! Honestly, just in shock. But it’s the most incredible thing ever so I’m just on cloud nine. It’s just mad!”

On the glamour of her reveal photos:
“Would you expect anything less? I’m so extra. It needed to be extra. And it had to be green as well.”

On what it was like shooting the video for Confetti:
Jade: “It was honestly probably the most fun we’ve ever had on a video shoot. We obviously are the male versions of ourselves. It was a two day shoot, one day as Little Mix and one day as Little… whatever you’d wanna name it! It was something that we’ve wanted to do for such a long time. It took about six, seven hours getting prosthetics done for it, so we really went all in. The budget was there hun, we really delivered.”

Perrie: “I was really out of my comfort zone. I actually think I cried. I was like, ‘I can’t be a boy, I’m not very good at it!’ It was really hard because like, Jade was living her best life. She was like ‘I wear baggy stuff anyway, I love being like slouched…’ Whereas I’m a bit more girly girl and as a boy I was like ‘I look stupid!’ But I think that’s why it was good, coz we just went against the stereotype and lived our best lives. It was fun but the prosthetics, jeez. When they peeled them off at the end of the day it was like taking off your bra. It was the best feeling in the world.”

On what they’d like to do if they were actually men for a day:
Leigh-Anne: “I think I enjoyed it a bit too much. I dunno what it was, I just got into it. I loved it. I’d like to say what I’d do but I don’t wanna be rude. I would just like to know… what it’s like.”