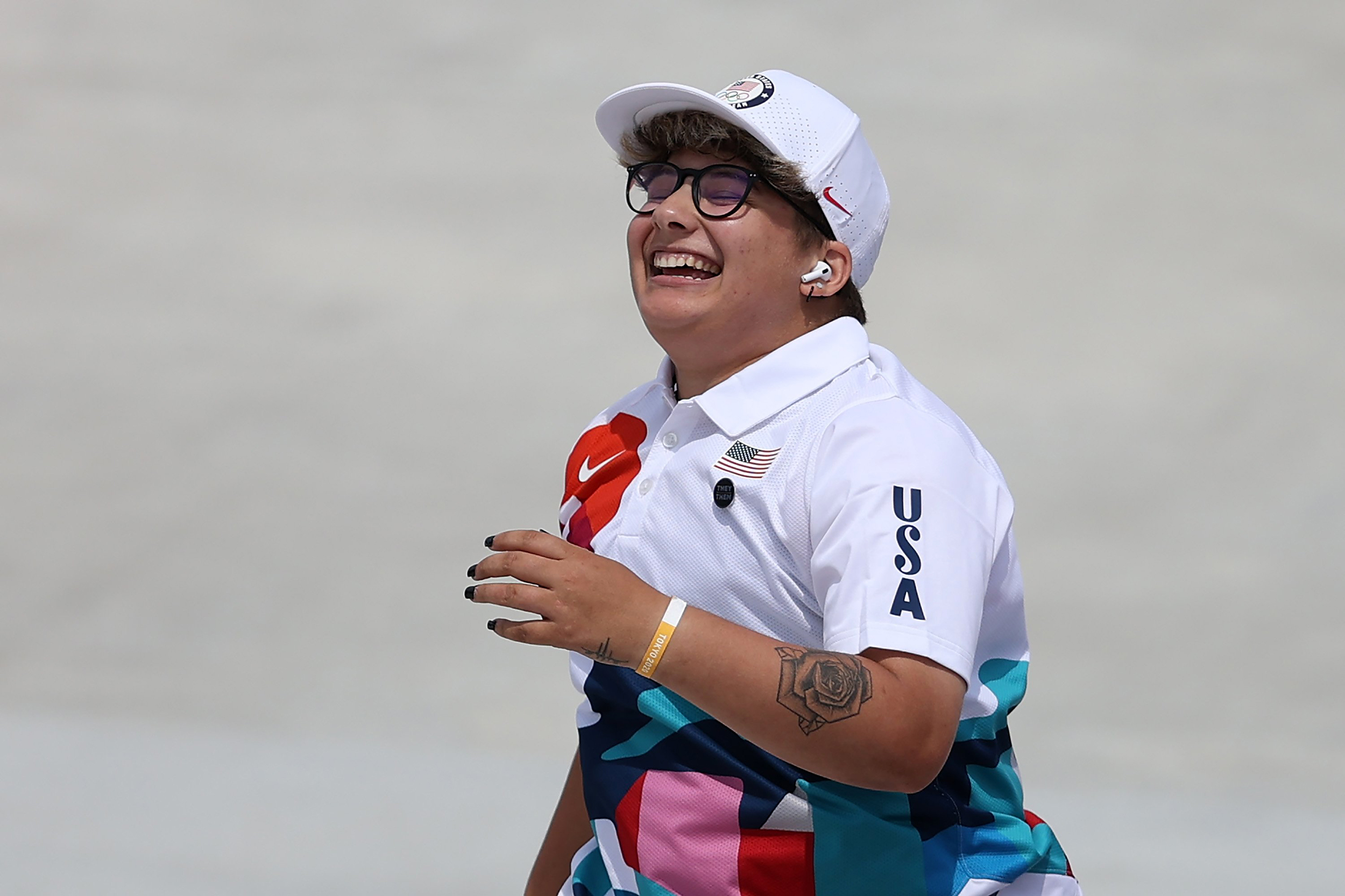 Nonbinary American skateboarder Alana Smith said their goal going into the Olympics “was to be happy and be a visual representation for humans like me.”

Though Smith placed last in their event, women’s street, on Monday, they wrote in an emotional post later that day that “for the first time in my entire life, I’m proud of the person I’ve worked to become.”

Smith, 20, has been open in the past about attempting suicide as a teen and said that after competing at the Olympics, they were grateful to be alive.

“I wanted to walk out of this knowing I UNAPOLOGETICALLY was myself and was genuinely smiling,” Smith, who lives in Fort Worth, Texas, wrote on Instagram. “The feeling in my heart says I did that. Last night I had a moment on the balcony, I’m not religious or have anyone/anything I talk to. Last night I thanked whoever it was out there that gave me the chance to not leave this world the night I laid in the middle of the road. I feel happy to be alive and feel like I’m meant to be here for possibly the first time in a extremely long time. On or off day, I walked out of this happy and alive… Thats all I have ever asked for.”

During Monday’s competition, Smith made a few mistakes and didn’t complete any of their more difficult moves, but they smiled throughout their round. At one point, they proudly held up their skateboard, where they had written their pronouns, “they/them.”

Fans on the internet rallied around them and celebrated the historic representation for nonbinary people.

LGBTQ sports website Outsports reported that some commentators from a variety of networks misgendered Smith by using the incorrect pronouns when discussing Smith and their performance. Smith also shared videos on their Instagram stories taken by supporters who were correcting commentators as they watched the Olympics.

NBC Sports, which shares a parent company with NBC News, issued an apology Tuesday for streaming coverage that misgendered Smith.

“NBC Sports is committed to — and understands the importance of — using correct pronouns for everyone across our platforms,” the network said in a statement, according to a press release from LGBTQ advocacy group GLAAD. “While our commentators used the correct pronouns in our coverage, we streamed an international feed that was not produced by NBCUniversal which misgendered Olympian Alana Smith. We regret this error and apologize to Alana and our viewers.”

Smith made a name for themself at just 12 years old, when they won a silver medal at the X Games in Barcelona in 2013. Also at 12, they became the first person competing in the women’s category to land a McTwist, which is a front flip that requires a 540-degree rotation.

This is the first Olympics in history that has featured skateboarding, with 16 athletes traveling to Tokyo to represent the United States. Smith qualified for the third Olympic spot in the women’s street category after competing at the World Skate World Championships in 2019, according to Dew Tour, which hosts international skateboarding competitions.

Smith is one of more than 160 openly LGBTQ athletes competing at this year’s Olympics and one of at least three openly nonbinary or transgender athletes, according to Outsports. Quinn, a midfielder for the Canadian women’s soccer team who goes by only their first name, is also nonbinary. Laurel Hubbard, a trans woman, will compete in the super heavyweight 87 kilogram-plus (192 pound-plus) category on Aug. 2.

Some viewers wrote on Twitter that Quinn, who is also the first openly trans person to participate in the Olympics, was also misgendered by commentators.

GLAAD also criticized the International Olympic Committee’s listings for both Quinn and Smith, which use the athletes’ correct pronouns but categorize them as “female.”

In response, GLAAD is calling on both journalists and the IOC to accurately recognize athletes’ genders in all of their coverage and communications.

“The Olympics coverage guide we published with Athlete Ally and Pride House Tokyo contains the most up-to-date terminology and recommendations — but when reporters and networks slip up, the best thing to do is sincerely apologize, reeducate, and follow best practices moving forward,” Mary Emily O’Hara, GLAAD’s rapid response manager, said in a statement, according to a press release.

“I can’t wait to skate for the love of it again, not only for a contest,” they wrote. “Which is wild considering a contest helped me find my love for it again.”

If you or someone you know is at risk of suicide, please call the National Suicide Prevention Lifeline at 800-273-8255, text TALK to 741741 or visit SpeakingOfSuicide.com/resources for additional resources.

Jo Yurcaba is an associate editor at NBC Out.