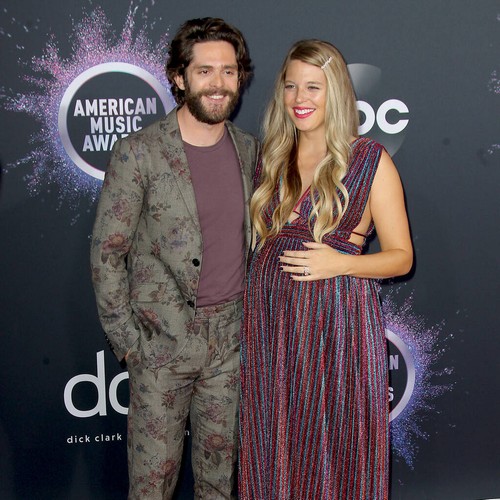 Country star Thomas Rhett is in awe of his “trooper” wife Lauren Akins for battling constant morning sickness during her latest pregnancy.

The Die A Happy Man hitmaker will become a father for the fourth time in November when the couple welcomes its fourth girl, but getting to the finish line is always a struggle for Lauren as each pregnancy has been a rough ride.

“(This pregnancy is) probably one of the worst for her as far as nausea and yakking all day,” Rhett tells People.com.

“Lauren just has rough pregnancies,” he shares. “I’m sure there’s a lot of mums out there that feel that way. But when Lauren gets pregnant, the whole getting sick first trimester and then you’re done just has never really applied to her.”

The musician admits it’s been hard to watch his loved one struggle through the severe symptoms, especially as there’s little he can do to ease her condition.

“It’s just really sad because I feel like I can’t do anything to help, except order Taco Bell (fast food) at 11.30 at night to put something in her stomach,” he says, insisting Lauren is “such a trooper” as she never complains about being sick.

“You can just kind of see it a little bit on her face,” he adds. “But we’re going to get through it and we’ll have a beautiful fourth daughter out of it.”

The couple already shares Lennon, 14 months, Ada, three, and adopted five-year-old Willa, and Rhett reveals the two older kids were a little disappointed at first after discovering their new sibling would be another girl.

“Lauren was showing them the pregnancy test and she was like, ‘This means that you’re going to have another sister,'” he recalls. “And they both were just like, ‘But we wanted a brother!’ And they looked at me like it was my fault, and I was like, ‘No, this is going to be awesome.'”

Ada and Willa have since come around to the idea of adding another girl to their family, and Rhett couldn’t be happier.

“I feel like I’ve got the ropes down as to what that looks like, being a dad to a girl,” he explains.